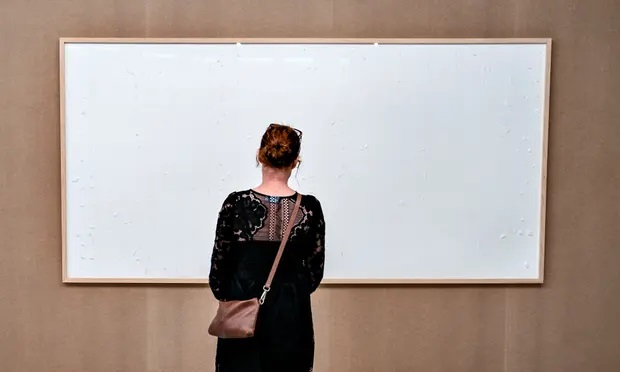 An empty frame from Take the Money and Run by Danish artist Jens Haaning. ‘The work is that I have taken their money,’ Haaning says. Photograph: Henning Bagger/EPA

In an unexpected reinterpretation of an earlier work, a Danish artist has left a museum with empty frames, a depleted bank account and red faces all round.

Rather than applauding Jens Haaning’s artistic commentary on modern capitalism, the Kunsten Museum of Modern Art in northern Denmark has said the artist is in violation of a legal agreement – and in possession of more than $84,000 belonging to the institution.

Haaning, a conceptual artist whose work focuses on power and inequality, was commissioned by the museum to recreate two earlier works which used bank notes to represent average incomes. A 2007 work, An Average Danish Annual Income, displayed krone notes fixed to canvas in a frame, and a second 2011 work about Austrian incomes used Euro bills.

The Kunsten museum provided 534,000 krone from its reserves for the recreated artworks as well as an artist’s fee of 25,000 krone (about $3,900). But when staff unpacked the newly delivered works last week, they found two empty frames with the title Take the Money and Run.

“Two days before the exhibition opened, Haaning sent us an email saying he had sent us a new work,” Lasse Andersson, the museum’s director of the Kunsten museum, told the Guardian.

“We are not a wealthy museum,” he said. The money came from modest reserves earmarked for the upkeep of the building. “We have to think carefully about how we spend our funds, and we don’t spend more than we can afford.”

Andersson said the museum’s contract with Haaning required him to return the money by 16 January. “I believe he will give it back to us. He is a well-regarded artist. But if we don’t get it back, we will have to file charges against the artist.”

Haaning, 56, said he had no intention of complying with his contract. “The work is that I have taken their money,” he told Danish radio. “It’s not theft. It is breach of contract, and breach of contract is part of the work.”

Haaning said recreating his earlier artworks would have left him out of pocket.

“I encourage other people who have working conditions as miserable as mine to do the same. If they’re sitting in some shitty job and not getting paid, and are actually being asked to pay money to go to work, then grab what you can and beat it,” he told the Danish national broadcaster DR.

The commissioned artworks were intended to form part of an exhibition at the museum about the relationship between art and labour. Work It Out opened last week and runs until mid-January.

The museum, which decided to display Haaning’s new work despite its loss of thousands of dollars, insisted that the missing money was not a stunt to promote the exhibition. “We are a platform for art, we do not create performative art. I’m just as puzzled as everyone else,” said Andersson.