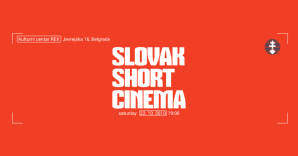 Selection of the best Slovak short contemporary cinema will be introduced in Kiev by Slovak film critic and editor of movie magazine CinemaView.sk, Juraj Kovalčík

The films will be shown in original language with English subtitles.

DRUHÝ POKUS (Second Chance, 2014): Twenty years ago Slovakia was unprepared to govern itself. With the current pace it may reach democracy in about 200 years. People are not used to bear responsibility for their own decisions; there is no continuity of governance, institutions, no respect for mostly fake authorities. This documentary farce shows an attempt to save a young Carpathian democracy by foreign intervention.

NINA (2014): A timid boy and woodland girl are both connected and separated by fear. They develop a strong bond which becomes almighty in their fantasy world. But as their friendship turns to love, fear arrives, and has an unexpected form. Overcoming fear and finding a common journey will not be easy. It will be difficult.

YOU ARE HERE (2015) is a visual experiment about the oldest tourist outlook tower in Slovakia and its keeper Andrej. Andrej patiently waits while it's snowing outside. And pilgrims can see their whole life from the top of the tower. All the surrounding mountains are covered with their personal stories. There is red sign YOU ARE HERE. Just like on a map. So as to know, where exactly they find themselves in their life story.

V RADE (In Line, 2014): Tedious queueing is not always rewarded. A short animation about one of the less enjoyable „activities" in one's life.

CHRONOS (2015): A troubled middle-aged businessman finds himself looking at the world upside down through a hotel room where time runs backwards. This film was awarde as the best short at the Philip K. Dick Science Fiction Film Festival 2016 in New York.

SILA PRÍŤAŽLIVOSTI (Force of Attraction, 2014): Two astronauts representing their countries are pitted against each other. They both find themselves in an open space, where the laws of gravity no longer apply. During their struggle they reveal surprising facts and experience previously unknown sensations. Gradually discovering that it is not important, what separates them, but what unites them.

HNIEZDO (Nest, 2015): For several years, Mrs. and Mr. Kičák, instead of peaceful retirement, have been reconstructing their empty family nest in the illusion that their three adult children will return back to their village. Each of the parents have compensated for a previous childcare in their own way and often more with the material things than in their relationship.

KOVBOJSKO (Cowboy Land, 2015): According to the rules of the Wild West, thieves must be punished. But when the sheriff's horse fails, there is no-one to put a stop to breaking the law.

HVIEZDA (The Star, 2012) tells a story of Ján Slovák, a 55-year-old welder, who fell in love with acting. His desire began, when he got the lead role in a theatrical adaptation of the worst movie of all time, Plan 9 From Outer Space by Ed Wood Jr. The passion for theatre became his destiny.