Enikő Vincze, Babes-Bolyai University, Cluj-Napoc On May 28th the liberal Romanian government published the last data on the employment situation. This is therefore a good time to review the fate of Romanian labor in and after the lockdowns. I argue that we see a deepening of the export oriented neoliberal paradigm that demonizes the “social” and represses social reproduction in favor of subsidies to capital. Moreover, some of those subsidies now go towards increased militarization and the further beefing up of policing. What the liberal government calls “economic recovery” policies, turn out to be nothing more than a return to the “normality” of state supported international capital accumulation that has characterized much of post-socialist Europe after 1989. 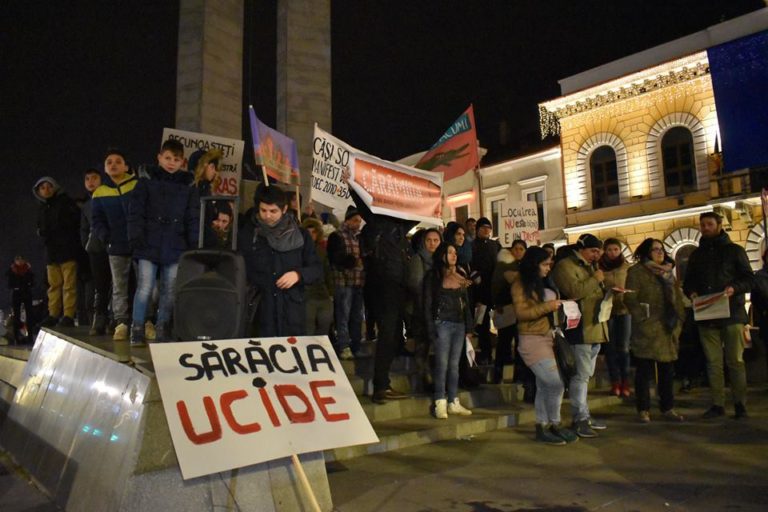 Reviewing labor contract data from the end of March to the end of May, one notices a steady increase in the number of both suspended and terminated contracts. By the end of April, this trend changes: suspensions decline while terminations increase. By the end of May, the total number of suspensions and terminations reaches alarming proportions: over 1 million. More than four hundred thousand workers (especially in manufacturing, retail, and construction) had their labor contracts fully terminated. These workers receive paltry unemployment benefits of 25% of the minimum wage, amounting to about 330 lei/68 euro per month. If they are lucky and can claim technical unemployment, they receive 75% of their salaries. This probably means that some 600,000 former manufacturing and retail workers will now receive a monthly benefit of about 1,000 lei/208 euro (75% of the minimum wage). By the end of May, then, about 1,100,000 workers have less than some 200 euro per month while the value of the minimum consumption basket is even in the official calculation more than double that amount (at the end of 2019, the minimum consumption basket was over 2650 lei/525 euro per month).

The labor crisis is exacerbated by the return of Romanians who used to work abroad: 1,270,000 of them at the end of April, of which at least 350,000 are actively looking for a job and receiving unemployment benefits. Of a total Romanian population of 17/18 million, some 1,5 million people, then, live on an income that just allows for bare survival. However, one should point out that this is not new for them: they were pretty bad or very bad off even before the pandemic, when they had fully paid jobs. Now, they hardly differ from the more than 4,632,000 persons who, according to Eurostat 2019 data, lived below the official poverty line, meaning on less than 900 lei/191 euro per month. In sum, 30 years after the revolution and 12 years after EU accession, Romania, a belated but by now dedicated student of neoliberal transition economics, may well have some 6 million people just above or under the poverty line, about half the working population. Against the policy rhetoric, these people have no “normality” to return to after the pandemic (keep in mind that In the “old good times”, over 30% of Romania’s employees (or 42% of formal employment contracts) earned only half the value of the minimum consumption basket per month). But the current government does not even talk about inequalities, poverty, or the public responsibilities of the state for the dispossessions brought by capitalism. Instead, it dreams of returning to a fictitious normal that for many never existed. As in the past, the crisis of capitalism induced by the Covid pandemic is solved through the “normality” of state supported capital accumulation: further enrichment of the rich, facilitation of transnational capital, and even deeper impoverishment of the many.

The current government’s “economic recovery plan” is leading to the further pauperization of labor (for more details see here). The plan is based on state aid schemes used throughout EU in the context of the pandemic: guaranteeing commercial loans for firms, but also capital and investment loans for both small and medium-sized enterprises, and large companies; subsidizing the interest rates of bank loans; offering aid to newly established companies. Moreover, there are several other facilities granted to large property owners: reducing the price of electricity for large consumers, refunding VAT, halting seizure on their debts. The government also foresees some measures to support employers who keep employees in their jobs or plan on hiring new staff. However, it does not provide anything that would directly support labor, like raising wages or improving labor conditions. In short, it is imagined as an economic recovery but not for ordinary people.

These ordinary people are told the EU funnels billions of euro to aid Romania’s recovery. At the same time, the government refuses any talk of wage rises, social protection, or public housing investment. Such talk is branded “toxic populism” or “economic ignorance” of the critical role that investment rather than consumption plays in growth. Romanian labor is no longer interesting, not even as a consumer. This supply-side policy in support of capital is based on the expectation that labor must remain cheap (regardless of the problems that further decreases in demand would create for many local small enterprises), so that international capital may come along to exploit it. But will an export-led model work in a global economy interrupted by a global recession, with shrinking returns to capital? True, for Romania it did work in 2010. But will it again?

After the pandemic has shown so clearly that labor is the very carrier of production, the current Liberal government chooses to further disregard workers. Instead, it’s doing everything possible to grant state aid to multinational companies operating in Romania. For that goal this government is also ready to borrow on the international market or from international financial institutions, which will push debt over the 50% of GDP threshold that rules as “normality” in CEE, in which case international pressure will force it to cut public sector spending such as on public wages, social assistance, and social protection. Saving capital goes therefore hand in hand with austerity measures (as prescribed in the Convergence Program 2020 of Romania, see Vincze 2015). Once again we see the tasteless spectacle of arrogant private entrepreneurs being saved by the visible hand of the state, grinning with satisfaction at public sector cuts while claiming the right to be supported at all costs, looting the public sector on behalf of their apparently deserved private profits.

In contrast to the 2008 crisis, however, this time Romania bets that the military industry will save the economy. “Among the government’s priorities are greenfield and offset investments in industries such as the military,” says the prime-minister. This option crowns former initiatives such as the acquisition of the $ 3.9 billion American Patriot missile system, promoted by the country’s president since his first mandate. The 2020 budget allocations provide for an 18% rise of military budget as compared to 2019, while the Ministry of Internal Affairs can do with an extra 13% on top of the increased budget for the Romanian Intelligence Services.

In this increasingly troubled world with various contradictory scenarios for the future, there is a risk that the current crisis of capitalism will be resolved not only by the militarization of the economy but also by rising political and social fascism. There is consistency there. Promoting racialized hatred (Stoica 2020), provoking interethnic conflicts and tensions between social classes is part of the justification for investments in a police state with military muscle. As other branches of industry are struggling hard to recover from the recession, capital needs war industry investments to save itself. Perversely, Romania’s leaders also offer the domestic reserve army of labor the opportunity to make a career out of warfare. President Iohannis recently stated that Romania’s armed forces can be made available for participation in missions and operations outside the Romanian state, claiming “important resources for equipping the Romanian Army make it possible to achieve national defense capabilities within the collective defense system of NATO and, at the same time, coherent multiannual programs can offer the Romanian industry the chance to relaunch. especially through institutional cooperation with the companies of our allies.”

We may not be surprised by these developments, but we can and must revolt against them. We could begin by imagining different economic recovery scenarios. What if the state took over the companies that can no longer function according to the rules of the “free market”? What if state aid came with the demand for decent wages for the employees? What if the state taxed large fortunes in real estate and banking accumulated over the past decades? What if the state decided to implement measures in support of people rather than profit: banning forced evictions, municipalization of public utilities, controlling private rents, achieving a significant stock of social housing through various methods? What if the state acted for the benefit of labor? For peace and disarmament? What if we did all of this now, to mark 75 years since the defeat of fascism and the promise of a better era for humanity? Why long for the “normality” of capital accumulation when we can long for other possible worlds?

This is the English version of an article published in Romanian on the platform Baricada, June 4th, 2020. The Romanian version contains additional graphs and references. Accessible here: https://ro.baricada.org/relansarea-economica-a-romaniei/