“Let me be clear: We are united as Democrats in our unequivocal commitment to supporting Ukraine in their fight for their democracy,” Rep. Pramila Jayapal clarified. 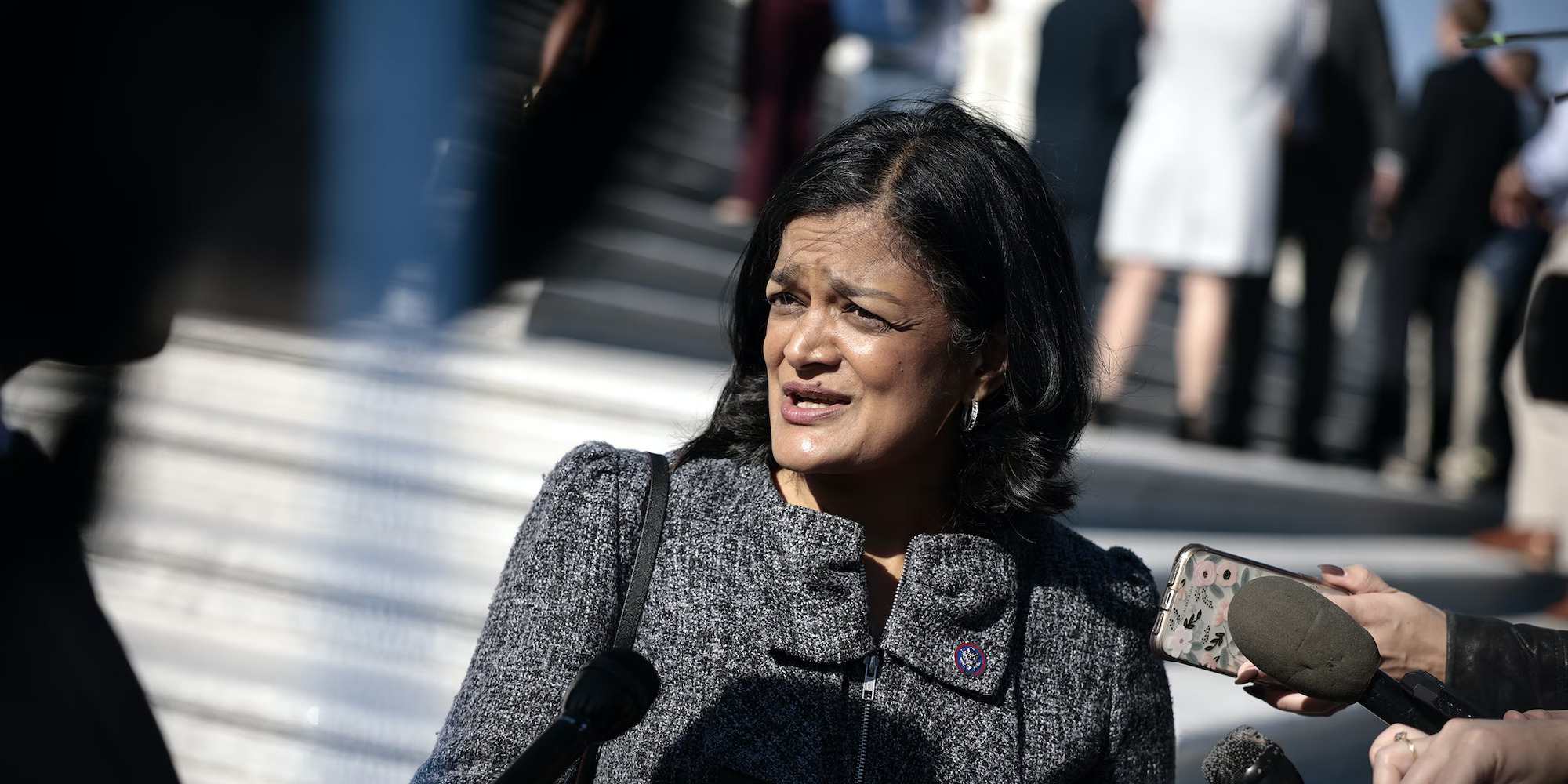 On Monday morning, 30 members of the Congressional Progressive Caucus sent a letter to the White House that attempted to gingerly open a conversation about a potential diplomatic end to Russia’s war on Ukraine. The door was slammed shut by the evening, met with enough fury to elicit a “clarification” in the form of a statement from caucus Chair Pramila Jayapal.

“Let me be clear,” Jayapal said in a statement issued just before 7 p.m., “We are united as Democrats in our unequivocal commitment to supporting Ukraine in their fight for their democracy and freedom in the face of the illegal and outrageous Russian invasion, and nothing in the letter advocates for a change in that support.”

On Tuesday afternoon, Jayapal followed the clarification by fully withdrawing the letter, saying it was “released by staff without vetting.”

That Monday morning, the Washington Post reported, CPC members were “urging President [Joe] Biden to dramatically shift his strategy on the Ukraine war and pursue direct negotiations with Russia, the first time prominent members of his own party have pushed him to change his approach to Ukraine.” Such diplomacy could ultimately end with Russia gaining territory by force, even as it is faltering on the battlefield.

That the letter was met with fierce opposition is a measure of the space available for debate among congressional Democrats when it comes to support for the war and how it might be stopped before it turns nuclear: roughly zero.

“I have voted for every defense package to Ukraine and stand firmly for Ukraine’s sovereignty,” Rep. Ro Khanna, D-Calif., a letter signer, told The Intercept. “It should not be controversial to say we need to explore every diplomatic avenue to seek a just peace and to end the war, including the engagement of our allies to help with that.”

The CPC letter took every pain to account for the argument against U.S. negotiations with Russia over the war — the most common being that Ukraine is the one at war, therefore only Ukraine can open the door to diplomacy. “We agree with the Administration’s perspective that it is not America’s place to pressure Ukraine’s government regarding sovereign decisions, and with the principle you have enunciated that there should be ‘nothing about Ukraine without Ukraine,’” the letter read.

“The shrill response to this utterly moderate letter exposes that war proponents are scared of an open debate.”

“We are under no illusions regarding the difficulties involved in engaging Russia given its outrageous and illegal invasion of Ukraine and its decision to make additional illegal annexations of Ukrainian territory. However, if there is a way to end the war while preserving a free and independent Ukraine, it is America’s responsibility to pursue every diplomatic avenue to support such a solution that is acceptable to the people of Ukraine.”

It added that any ultimate framework would need to be approved by all parties, “particularly Ukrainians.”

“The alternative to diplomacy is protracted war, with both its attendant certainties and catastrophic and unknowable risks,” the letter read. It had been endorsed by the nonprofit groups Campaign For Peace, Disarmament, and Common Security; Just Foreign Policy; Friends Committee on National Legislation; MoveOn; Peace Action; Physicians for Social Responsibility; the Quincy Institute for Responsible Statecraft; and Win Without War.

Late on Monday, Rep. Mark Takano, D-Calif., also issued a clarifying statement. “Only Ukrainians have a right to determine the terms by which this war ends,” he said.

That notion that Ukraine is fully guiding the policy is undermined by NATO’s intervention against peace talks last spring. And the idea that only Ukraine has an interest in the war ignores not just the fact of U.S. funding for it, but also the obvious point that global nuclear war — or any global war —  is a concern not just for Russia and Ukraine. That reality was referenced in the initial statement accompanying the letter. “As the risk of nuclear war increases, fighting in Ukraine escalates, and global economic insecurity deepens, 30 members of Congress urged President Biden to pursue direct diplomacy for a negotiated settlement to end Russia’s war in Ukraine,” the press release read.

But the constraints of the debate have made discussing what it could take to stop it off-limits. “Diplomacy is an important tool that can save lives — but it is just one tool,” Jayapal’s “clarification” read. “As we also made explicitly clear in our letter and will continue to make clear, we support President Biden and his administration’s commitment to nothing about Ukraine without Ukraine.”

Sen. Chris Murphy, D-Conn., was among those to criticize the letter obliquely, writing on Twitter, “There is moral and strategic peril in sitting down with Putin too early. It risks legitimizing his crimes and handing over parts of Ukraine to Russia in an agreement that Putin won’t even honor.”

The letter also ran into an electoral buzzsaw. House Speaker-in-waiting Kevin McCarthy, R-Calif., recently told Punchbowl News that with Republicans in charge, Ukraine policy could change. “I think people are gonna be sitting in a recession and they’re not going to write a blank check to Ukraine,” he said. Democrats have pounded McCarthy for the suggestion.

Others came at it directly.

DailyKos founder Markos Moulitsas deployed a rhetorical device increasingly used to build guardrails around debate: If you’re not fully supportive of the party position, you are effectively aligned with Rep. Marjorie Taylor Greene. “These 30 House progressives are now making common cause with Lauren Boebert, Marjorie Taylor Green, JD Vance, and the rest of the MAGA crowd. You’d think that would give them *some* pause,” Moulitsas wrote on Twitter. “Which Ukrainians do these ‘progressives’ want abandoned to mass murder and rape, in their attempt to prop up a flailing Russia? The only way to end this war is to help deliver a decisive Ukrainians victory.”

Erik Sperling, executive director of Just Foreign Policy, which endorsed the letter, cast the extreme opposition to it as a sign of the fragility of the anti-diplomacy consensus. “The shrill response to this utterly moderate letter exposes that war proponents are scared of an open debate about the range of potential approaches to address this escalating conflict,” Sperling said. “As happened with the war in Iraq and many others throughout human history, war proponents attempt to silence debate in large part because they aren’t confident in their arguments and are afraid that pro-diplomacy views will appeal to average Americans. With polls already showing growing opposition to U.S. military involvement in Ukraine, increasing concern from progressives will only make it harder for war proponents to cast conventional pro-diplomacy views as ‘far-right’ or ‘pro-Putin.’”

Meanwhile, Biden himself has said repeatedly that only negotiations can ultimately end the conflict, as the letter noted — and that nuclear war is more imminent now than at any time since the Cuban missile crisis. “We urge you to pair the military and economic support the United States has provided to Ukraine with a proactive diplomatic push, redoubling efforts to seek a realistic framework for a ceasefire,” the letter offered. “This is consistent with your recognition that ‘there’s going to have to be a negotiated settlement here,’ and your concern that Vladimir Putin ‘doesn’t have a way out right now, and I’m trying to figure out what we do about that.’”

Among congressional Democrats, however, the process of figuring that out is apparently not allowed to include discussion of how to get to a negotiated settlement.

Update: October 25, 2022, 1:15 p.m.
The article has been updated to include further development following publication. In a statement issued Tuesday afternoon by CPC Chair Jayapal, the letter was completely withdrawn. Earlier, former CPC Co-Chair Mark Pocan, D-Wisc., had claimed the letter was initially drafted in July and “I have no idea why it went out now.” The full capitulation:

The Congressional Progressive Caucus hereby withdraws its recent letter to the White House regarding Ukraine.

The letter was drafted several months ago, but unfortunately was released by staff without vetting. As Chair of the Caucus, I accept responsibility for this. Because of the timing, our message is being conflated by some as being equivalent to the recent statement by Republican Leader McCarthy threatening an end to aid to Ukraine if Republicans take over. The proximity of these statements created the unfortunate appearance that Democrats, who have strongly and unanimously supported and voted for every package of military, strategic, and economic assistance to the Ukrainian people, are somehow aligned with Republicans who seek to pull the plug on American support for President Zelensky and the Ukrainian forces.

Nothing could be further from the truth. Every war ends with diplomacy, and this one will too after Ukrainian victory. The letter sent yesterday, although restating that basic principle, has been conflated with GOP opposition to support for the Ukrainians’ just defense of their national sovereignty. As such, it is a distraction at this time and we withdraw the letter.